“This signifies everything in the sports world,” Rodriguez remarked.

We can run great races, win world championships, and each event has its own rich history, but the Paralympics are on a whole other level. 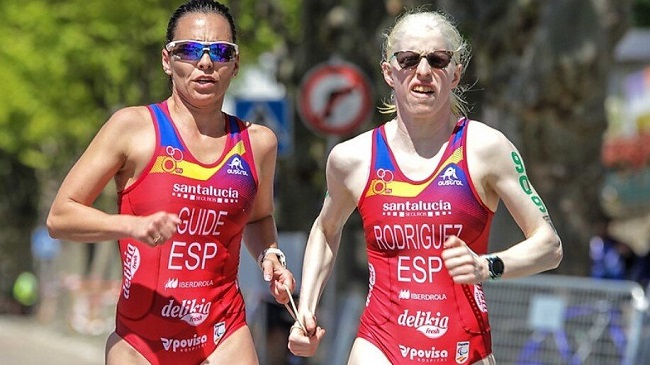 Rodriguez’s Success Exemplifies her Tenacity as an Athlete and a Person.

Rodriguez was chosen to compete at the 2008 Olympics in Beijing, however she was ultimately cut.

Saddened by the experience, Rodriguez retired from sports to study physiotherapy and medicine.

However, athletics beckoned once more. Rodriguez found para triathlon while pursuing a profession in medicine and competed again in 2016, finishing fifth at the Olympic Games in Rio. Rodriguez had to be on the front lines last year when COVID-19 broke out in Europe, but now that Tokyo 2020 has been pushed back a year, she can focus on getting ready for the games.

Rodriguez Claims that Competing in the Paralympics was a Lifelong Goal of hers:

The athlete was born with albinism and serious sight impairment and has desired to compete in the Paralympics ever since she learned of her condition as a child.

Susana Rodriguez Gacio, a physician from Spain and the reigning world champion in the Para triathlon, was looking forward to taking some time off at the start of 2020 to prepare for the Tokyo 2020 Paralympic Games. It’s common knowledge what occurs next.

However, Rodriguez found herself in the front lines of her county’s response to COVID-19. She helps people get back to normal by working as an occupational therapist for them after they’ve been hospitalised.

“At the height of the COVID epidemic, I was assisting patients in their recovery while simultaneously supporting the hospital’s efforts to diagnose and treat those who had contracted the disease.”

She explained, “It was challenging for me as a blind person, as I rely on touching. Since COVID 19 made physical contact extremely risky, it was strictly forbidden. So I did a lot of tidying up and avoiding eye contact.

Rodriguez was able to devote more time to her career and finishing her medical training in physical medicine and rehabilitation because the Olympics were postponed.

During the summer and early fall of this year, she put in extra time and effort to become the first blind person in Spain to earn that certificate.

The hospital recognised her efforts and offered her a second year of employment, but she turned down the offer in order to focus on the rescheduled Games.

The 2018 and 2019 world champion elaborated, “I decided to focus now on Tokyo instead since it has been a rough year – it has been so demanding and stressful.”