When the 2020 Summer Olympics are held in Tokyo, Japan, Ilardi will be a part of the first-ever U.S. Olympic skateboarding squad.

Jake Ilardi is most comfortable in the shadows.

He prefers to let people like Nyjah Huston and Zion Wright, both of whom are also from Florida and on the USA team, bask in the limelight. 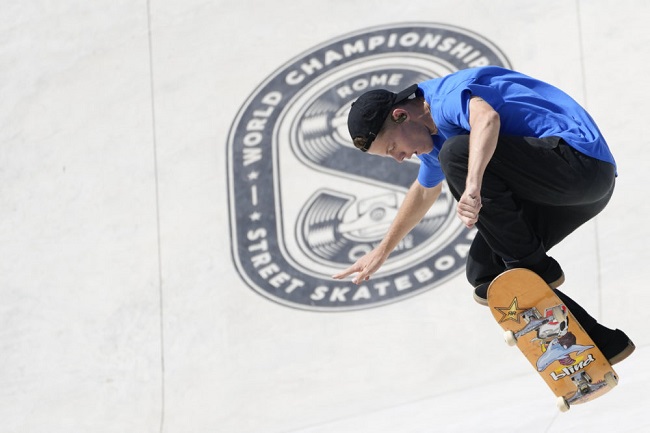 Huston is a global icon and brand unto himself, while Wright is a park hero who seems to need attention as most people need oxygen.

“I’ve just always enjoyed skating, as far back as I can remember,” said the modest Ilardi, who edged out handrail magician Jamie Foy to become the third and final qualifier for the United States of America’s three-rider deep men’s street team.

I’m here to do what I’ve always wanted to do, which is represent the United States of America and skateboarding.

When Ilardi is out and about, be it on the courses or in a public area, he never goes anywhere without his headphones on, and he always appears to be immersed in his own world of solitude. He’s not one to talk much, preferring instead to let his skating do the talking for him.

Jake Ilardi, a 2020 Venice High School alum, will represent the United States in the inaugural Olympic competition for street skateboarding.

Clark Dean, a fellow Pine View School alumnus, is another local athlete competing in the Olympics.

Ilardi was one of three men’s street skateboarding athletes to qualify for the United States and compete in the Sunday preliminary rounds.

Unfortunately, he was Unable to Advance to the Championship round.

Ilardi, now 24, and his twin brother Nate were reared by their grandmother in their hometown of Osprey.

According on the USA Skateboarding website, he broke through to the mainstream in 2017 after winning the Empire Am Getting Paid event.

The article then observed that “since then, Jake has been on a binge of crushing contests and turning heads with his combined blend of park terrain skating and tech handrail feats.”

After earning notoriety in skateboarding, Ilardi turned pro in 2020, per the Tokyo Olympics website.

According to the official U.S.A. Skateboarding website, Ilardi is ranked number two in the United States and number seven in the world.

We weren’t able to get in Touch with him despite our best efforts.

After his participation in the 2020 Olympics came to an end, Ilardi began planning for the future.

Can’t wait to see where my skateboard and the rest of my adventure takes me,” he commented on one of his social media accounts. We’ll catch up in 2024.

There were a Number of Olympians from Sarasota County besides Ilardi.

Sarasota’s Clark Dean and his crew took part in Tuesday night’s final men’s four rowing race. We were unable to complete the analysis in time.

But he has seen more than his fair share of wounds. Ankle sprains, broken bones, nerve damage, and the need for stitches or staples are just some of the more common medical interventions.

Ilardi believes that he and other prospective skateboarders will have more options once skateboarding becomes widely popular around the world in a matter of months.

Given his newfound fame as a professional skateboarder and Olympic competitor, he hopes to gather support for a second skatepark in his hometown. Deals and sponsorships might also be possible.

According to Ilardi, “more skaters are going to be born from this” for the sport of skateboarding. That’s definitely going to occur. What I know for sure”