Speed skating is an Olympic event that calls for extraordinary quickness, equilibrium, and stamina.

There are 14 overall events, 7 for men and 7 for women, covering a wide variety of distances. Competitors skate against the time while wearing protective ice suits and clap skates with blade lengths varying from 14 inches to 18 inches. 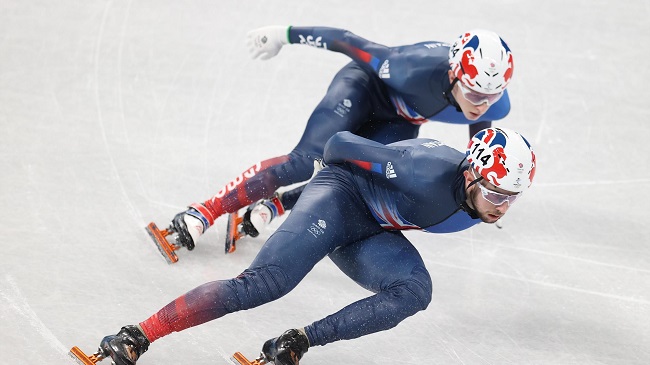 As of the 17th of February, Team USA is ranked fifth in the overall Winter Olympics medal tally thanks to its three speed skaters’ combined one gold and two bronze medals.

On February 13, Erin Jackson, 29, made history as the first Black American woman to win a medal in speed skating when she took first place in the women’s 500-meter race.

What kind of Speeds do Speed Skaters Achieve?

Skating at 25 miles per hour is considered pretty fast, of course, but maintaining that speed for an entire kilometre is going significantly faster than running (but slower than cycling).

Slightly slower, but only slightly, is Inline Skating on a Track or road.

In 2014, Belgian runner Bart Swings established the world record for the 1000 metres in 1 minute and 17 seconds in Geisingen, Germany. Put another way, that works out to an average of 29 mph (46.7 kph) or around 25 knots, for those of you who like the nautical measurement.

In other words, the inline skater’s average speed was higher, and hence she completed the distance faster than the Olympic record holder (and probably maximum as well).

According to Olympian and three-time mass start world champion Joey Mantia, speed skating is like “NASCAR on ice” and is not for the faint of heart.

Just know that nothing is going to stand in the way of the success of these professional athletes.

It took a Distance of 3098.88 Metres for the men’s Team Pursuit race to Determine the Average Speed.

The skaters take advantage of only the inside lane, shortening the lap distance from the standard 400 metres that would be covered by taking both the inside and outside curves.