Two minutes in, Mensah-Stock scored twice before Oborududu was able to escape and score.

In the final three and a half minutes of the contest, the American scored the only points of the bout with two points for a second takedown. 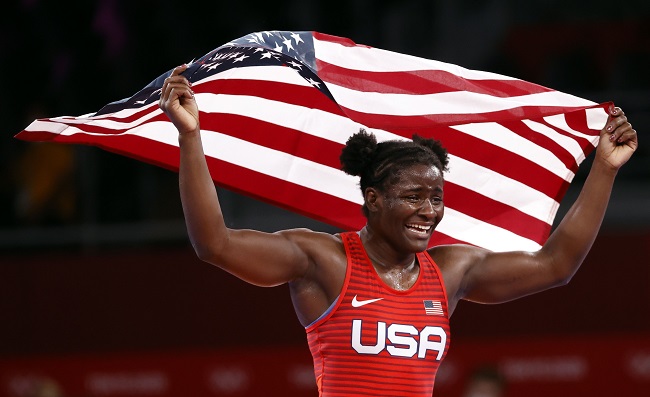 Even still, there was a great deal of Anxiety Preceding the Gold Medal Game.

The tournament’s top seed admitted, “I tried to keep calm but it was impossible; there were a lot of nerve-wracking moments.”

It wasn’t pretty; “I honestly don’t know how I did it; I just kept telling my coaches ‘I’m worried, I’m afraid.'”

Since the competition began on August 2nd, Mensah-Stock had been unstoppable at 68 kilogrammes, winning every bout by a cumulative score of 34-5. Among her four opponents was Rio 2016 gold medalist DOSHO Sara.

Tokyo, Japan hosted the women’s 68-kilogram freestyle event on August 2-3, 2021, at the Makuhari Messe in Mihama-ku during the 2020 Summer Olympics.

Oborududu became the first Nigerian to bring home an Olympic medal in wrestling.

There were a lot of calls and messages after her performance in yesterday’s semifinal match, she remarked. I put a passcode on my phone because I don’t want to be disturbed by incoming calls or texts.

In other words, “I know that I’ve created the record for my country.”