France defeated South Africa 4-3 on Sunday in the group stage of the men’s Olympic football tournament, thanks to a game-winning goal from Teji Savanier in stoppage time and three goals from Andre-Pierre Gignac.

At halftime, neither team had scored, but in the 53rd minute, South Africa took the lead with a goal by Kobamelo Kodisang. About four minutes later, Gignac scored his first goal to bring it to a draw. 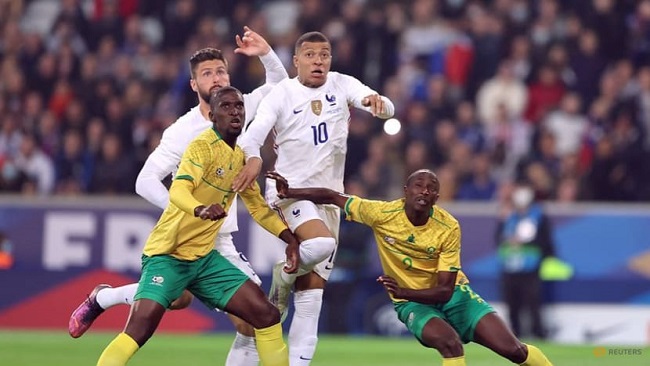 South Africa regained the lead thanks to Evidence Makgopa, but Gignac equalised once more in the 78th minute. Savanier’s late goal came after South Africa’s Teboho Mokoena scored in the 81st minute and Gignac converted a penalty kick in the 86th.

In the 40th minute, South African attacker Luther Singh took a penalty kick that went just wide of the goal after hitting the crossbar.

France, the 1984 Olympic gold medal winners, were blown out by Mexico, 4-1. In the same match, Gignac scored for Les Bleus as well.

When these two sides meet at Japan’s Saitama Stadium, both will be doing whatever it takes to come out on top.

On Thursday, Coach David Notoane’s squad lost their opening Group A match to tournament hosts Japan, 1-0, thanks to a goal from Takefusa Kubo with 19 minutes remaining in the contest.

When they play a depleted French team, they will be more motivated than ever to secure a win in order to keep their (realistic) Olympic quarterfinals chances alive.